The 5 Worst Winter Storms In History 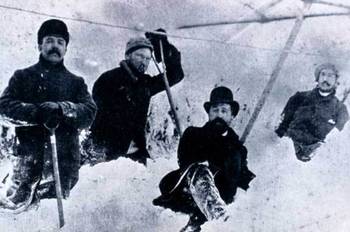 Mother nature has given us some violent and ferocious winter storms over the years. These vicious snow storms force us to change our way of life and adjust to the snowy circumstances. When considering the worst winter storms we have had to face, five storms readily come to mind.

There is a general consensus among weather experts and historians that the Great Blizzard of March 1888 is the worst winter snow storm of all time and certainly the worst for the Eastern United States. Worldwide weather patterns turned unpredictable and colder than usual after the 1883 eruption of Krakatoa volcano in Indonesia, which sent so much detritus into the atmosphere. One of the results of this chaotic weather seems to have been the Great Blizzard of 1888. Snow piled as high as 50 inches in some areas during this ferocious winter storm! As you can imagine, travel and commute was brought to an abrupt halt. You could walk from Brooklyn to Manhattan via the frozen East River. More than 400 people died because of the havoc brought on by the Great Blizzard of 1888.

The Schoolhouse Blizzard hit the Great Plains in January of 1888. The 1883 eruption of Krakatoa volcano in Indonesia, which immersed so much detritus into the atmosphere, really paved the way for chaotic global weather patterns. Weather experts believe that the Schoolhouse Blizzard was one of the results of this disruption to the environment. What began as a warm morning in the heartland turned brutally cold quickly. In Nebraska, temperatures were reported to drop some 18 degrees in a matter of just three minutes. In Helena, Montana, temperatures were reported to drop 50 degrees over the course of just a few hours. The Schoolhouse Blizzard claimed 230 casualties alone just due to extreme temperature changes so abruptly. You may be curious why this winter storm is known as the “Schoolhouse” Blizzard. Tragically, many of the casualties were schoolchildren and teachers who were trapped in small schoolhouses.

Despite the fact that there are no recorded deaths as a result of it, the Great Blizzard of February 1899 still stands as one of the worst winter storms ever. While much of the Eastern United States was impacted by this blizzard, it really hit the South hard and led to record low temperatures. Washington DC experienced -15 degrees; Atlanta -9 degrees; and Minden, Louisiana -16 degrees. The entire south faced sub-zero temperatures during this blizzard. The Great Blizzard of February 1899 really impacted peoples’ plans. Mardi Gras parades had to be postponed and Valentines Day plans were ruined for many.

The Big Blow of November 1913 was an epic and disastrous winter storm that claimed over 250 victims, mainly from ships that were sunk. In November 1913, two separate cold fronts converged over the Great Lakes, which created a vicious weather event that history will never forget. The entire region would be pummeled by 60-90 miles per hour winds for at least the next 16 hours. Cities from Chicago to Cleveland were hit with several feet of snow. With so many casualties as a result of it, the Big Blow of November 1913 is one of the deadliest winter storms in history.

Wouldn't have anybody else. Friendly, knowledgeable, good prices, and courteous. Only company that we trust.